In one fell swoop, years of reporting from the Chinese-language website of Hong Kong’s main English newspaper, the South China Morning Post, is gone.

This is the notice that users saw when they went to the Chinese site, nanzao.com, on Friday (Sept. 9) afternoon: 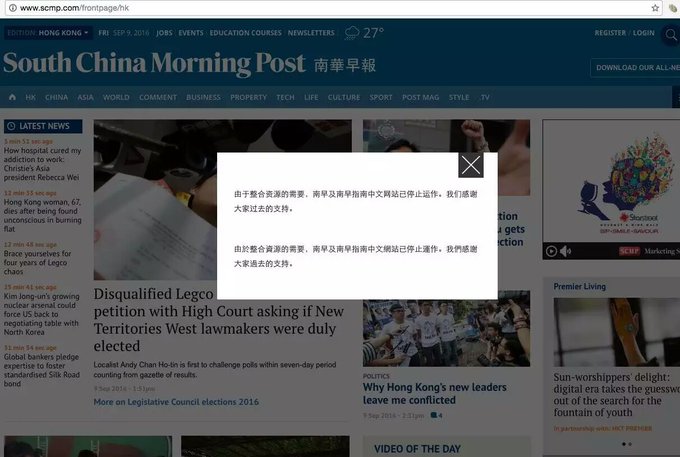 “We thank you for your past support,” the notice adds.

Current and past employees of the SCMP told Quartz that they were not told about the decision to shutter the site.

One story that has disappeared with the SCMP’s Chinese site is a controversial interview with Zhao Wei, a lawyer linked to human rights defender Li Heping, who were both arrested by Chinese authorities last year. The interview, which carried no byline, was first published on SCMP’s Chinese site in July before being translated for its English site. David Bandurski of the University of Hong Kong’s China Media Project J questioned how the SCMP managed to interview Zhao when she was still held incommunicado. No one close to Zhao had been able to confirm her release at the time.

The interview with Zhao is seen by some as part of a growing trend of forced and often televised confessions of Chinese dissidents, which are appearing in Hong Kong media outlets with growing frequency.

“Will the South China Morning Post now open itself up to moonlighting as a pawn of the mainland authorities in sensitive political cases? Will it allow itself to become a cog in China’s mea culpa machine?” wrote Bandurski.

The South China Morning Post was acquired by Jack Ma, one of China’s richest men and the founder of e-commerce platform Alibaba, in December 2015. Joseph Tsai, the executive vice-chairman of Alibaba,told the New York Times then that the decision to purchase the newspaper was made in order to provide coverage of China that was untouched by the “negative” bias of the Western media.

In 2013, Jack Ma was reportedly furious at the Chinese language website of the South China Morning Post after it ran an interview with him, in which he said that the 1989 crackdown on pro-democracy protesters in Beijing’s Tiananmen Square was “the most correct decision.”

A spokesperson said in response to a query from Quartz regarding the closure of the site that the four staffers working on the Chinese site would be reassigned to jobs elsewhere in the company, and that the “closure… enables us to align resources towards further growth.”

Founder, Mayo615 Technology Partners Ltd., UBC adjunct faculty, Intel alumni, technology assessment, international business, cleantech, fly fisherman, native Californian and citizen of France, who has been very fortunate to have traveled, lived and worked all over the globe. My wonderful wife, Isabelle has reintroduced me to my French Provençal heritage.

Begin typing your search above and press return to search. Press Esc to cancel.