Why did Uber spin so wildly out of control?

For over a  year now I have blogged here about the red flags flying about Travis Kalanick and Uber. Many investigative articles have been published over this time, in the New York Times and other publications, which have raised disturbing questions about Uber, Kalanick and some members of his team. The Board of Directors has finally taken action but it feels like its a day late and a dollar short.  Why did it take so long?  I have bluntly used the epithet that “Uber is Trump,” but now on reflection, it is more apt to describe Uber as Enron the sequel, and “deja vu all over again.” Remember the audio of two Enron electricity traders laughing about “screwing grandma?” That is Uber.

So as the current management adage says, culture trumps strategy.  This is not simply about the bad behavior of a few individuals and that eliminating them will solve Uber’s problems. The aggressive, confrontational business strategy is itself an integral and inextricable part of the problem. Some have said that Uber has a good business model and deserves to succeed.  I dispute that.  Jeremy Rifkin’s Third Industrial Revolution describes his vision for a new sharing economy.  The book has been read by world leaders and praised for its insights into a bright new evolving economy.  Uber and other companies like it have morphed the sharing economy into something ugly.
Uber morphed the sharing economy into “the gig economy,” epitomized by jobs without security or benefits, and the now viral video of Kalanick berating an Uber driver who was going bankrupt. SFGate also exposed the Uber operating strategy of psychologically manipulating drivers to work more hours than intended. The central principle of Kalanick’s business strategy is what he euphemistically describes as “principled confrontation.” Uber enters a market without following any existing rules or regulations, simultaneously entering into negotiations with municipalities which are typified by stalling tactics from Uber, and no intention to conclude an agreement. Uber’s goal is to take over the market by force, making any agreements with municipalities unnecessary. While pursuing its strong-arm goal, Uber has used a software tool, Greyball, to evade law enforcement. Uber is now under criminal investigation for the use of Greyball. Even the notion that Uber somehow improves traffic congestion has been debunked by a Northwestern University study commissioned by the San Francisco Transportation Authority which found that ride sharing has a heavy negative impact on San Francisco’s traffic congestion. See www.sfcta.org/TNCsToday
Uber is also facing a major lawsuit from Google for expropriating Google driverless car technology by hiring one of Google’s engineers. Uber has now fired the engineer in question, but the firing itself may be a circumstantial admission that its intent was to steal Google IP.  In another case, nearly 200 Uber employees were encouraged to use fake ID, burner phones and credit cards to sabotage Lyft, by booking and then quickly canceling more than 5000 rides with Lyft. Then there is the matter of what can now only be described as pervasive sexual harassment within Uber. Adding to all of these issues, local communities have begun to resist Uber much more aggressively. In one example, a protest movement in Oakland is opposing Uber’s plan to open offices in Oakland. There are other examples dotted around the World. Finally, there is the unresolved matter of the status of Uber’s drivers as “independent contractors or employees” which is nearing a final decision in California state and federal courts.
Clearly, Uber’s business strategy is driven by its ugly corporate culture. Stepping back to consider the complete picture, Uber’s business strategy looks to me like a house of cards.

Those who know me and my blogs here know that I am a student of Harvard Business School professor John Kotter and his philosophy of leadership with humility at its core.  Uber presents a leadership conundrum for me. I was interested to hear BackChannel journalist Jessi Hempel express the same point tonight on PBS Newshour.  Uber obviously urgently needs to change its culture, yet without the wild aggressive culture defined by Kalanick, the question remains whether Uber can survive? It is not clear to me that humility could turn the Uber cultural battleship. There have also been a number of business articles suggesting that changing a corporate culture is far more challenging than changing a corporate strategy. So I am left to ponder Peter Drucker’s Four Quadrants of Managerial Behavior, and Quadrant Four’s “high task, low relationship” model for Uber. I learned this in Intel’s M Series management courses years ago. The course used the case study of the film “12 O’Clock High,” a demoralized B-17 bomber unit as its example. Gregory Peck arrives as the new unit commander and begins by “kicking ass and taking names.”  A similar case would be George Patton’s arrival in North Africa to take command of a demoralized tank unit.  My sense at the moment is the only best hope is that somehow an interim leader at Uber will have the latitude to take whatever actions he deems necessary to right the ship.  Such a solution seems doubtful at the moment.

This morning on NPR’s Morning Edition, Nina Kim interviewed the Director of the Markulla Center for Applied Ethics at Santa Clara University, Kirk Hansen. The Center is named for early Intel and Apple executive, Mike Markkula. Mr. Hansen said that “Uber will undoubtedly become one of the most important business case studies” to emerge from Silicon Valley. Hansen went on to point out that founders of startups are often not capable of taking the company to a mature large company, and that it may be necessary to remove or reassign the founder. In the case of Uber, this is impossible because Kalanick and his founder group have the majority of shares.  This contrasts with most startups legal framework, where the investors or Board may hold the right to remove the founder in specific circumstances.

The Smartest Guys in the Room

As a grey-haired Silicon Valley alumni, I am personally offended and outraged by what has happened at Uber. I am deeply ashamed. Over the years I have worked for some well-known SV companies, startups, VC firms, and my own consultancy. I have personal knowledge of things that happened that were not kosher, and I have been present in situations where the ethics were not the best, but nothing in my Silicon Valley experience rises to the level of Uber. Something has gone wildly out of control since my time with how we conduct ourselves in business, and it is now tarnishing the history and reputation of fifty years of Silicon Valley achievements. From my own personal experience working at one wildly successful company years ago, and after rewatching the Enron documentary video,  “The Smartest Guys in the Room,” the answer is simple: too much money.

Uber Technologies Inc [UBER.UL] Chief Executive Travis Kalanick is likely to take a leave of absence from the troubled ride-hailing company, but no final decision has yet been made, according to a source familiar with the outcome of a Sunday board meeting.
Emil Michael, senior vice president, and a close Kalanick ally has left the company, the source said.
At the Sunday meeting, the company’s board adopted a series of recommendations from the law firm of former U.S Attorney General Eric Holder following a sprawling, multi-month investigation into Uber’s culture and practices, according to a board representative.
Uber will tell employees about the recommendations on Tuesday, said the representative, who declined to be identified.
The company is also adding a new independent director, Nestle executive, and Alibaba board member Wan Ling Martello, a company spokesman said.
Holder and his law firm were retained by Uber in February to investigate company practices after former Uber engineer Susan Fowler published a blog post detailing what she described as sexual harassment and a lack of a suitable response by senior managers.
The recommendations in Holder’s firm’s report place greater controls on spending, human resources and other areas where executives led by Kalanick have had a surprising amount of autonomy for a company with more than 12,000 employees, sources familiar with the matter said.
Kalanick and two allies on the board have voting control of the company. Kalanick’s forceful personality and enormous success with Uber to date, as well as his super-voting shares, have won him broad deference in the boardroom, according to the people familiar with the deliberations. 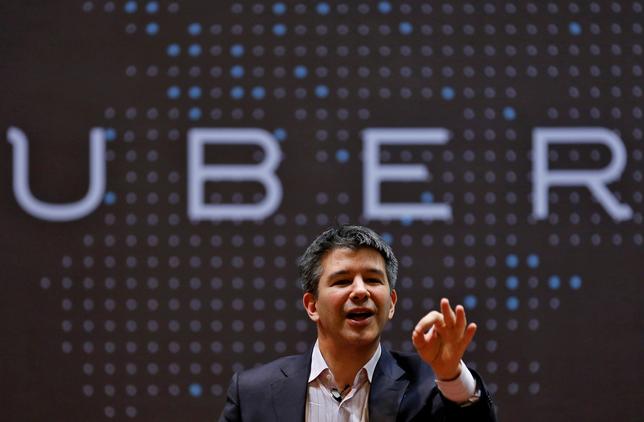 Any decision to take a leave of absence will ultimately be Kalanick’s, one source said.
The world’s most valuable venture-backed private company has found itself at a crossroads as its rough-and-tumble approach to local regulations and handling employees and drivers has led to a series of problems.
It is facing a criminal probe by the U.S. Department of Justice over its use of a software tool that helped its drivers evade local transportation regulators, sources have told Reuters.
Last week, Uber said it fired 20 staff after another law firm looked into 215 cases encompassing complaints of sexual harassment, discrimination, unprofessional behavior, bullying and other employee claims.

Even a temporary departure by Kalanick would be a shock for the Silicon Valley startup world, where company founders in recent years have enjoyed more autonomy and often become synonymous with their firms.
Uber’s image, culture, and practices have been largely defined by Kalanick’s brash approach, company insiders and investors previously told Reuters.
Uber board member Arianna Huffington said in March that Kalanick needed to change his leadership style from that of a “scrappy entrepreneur” to be more like a “leader of a major global company.” The board has been looking for a chief operating officer to help Kalanick run the company since March.
The debate over Kalanick’s future comes as he is also facing a personal trauma: His mother died last month in a boating accident, in which his father was also badly injured.
Michael, described by employees as Kalanick’s closest deputy, has been a recurring flashpoint for controversy at the company.
He once discussed hiring private investigators to probe the personal lives of reporters writing stories faulting the company. Kalanick disavowed and publicly criticized the comments.
Michael will be replaced as the company’s top business development executive by David Richter, currently an Uber vice president, the company spokesman said.
Alongside Uber’s management crisis, its self-driving car program is in jeopardy after a lawsuit from Alphabet Inc alleging trade secrets theft, and the company has suffered an exodus of top executives.
One Uber investor called the board’s decisions on Sunday a step in the right direction, giving Uber an “opportunity to reboot.”

Any cookies that may not be particularly necessary for the website to function and is used specifically to collect user personal data via analytics, ads, other embedded contents are termed as non-necessary cookies. It is mandatory to procure user consent prior to running these cookies on your website.