Another Silicon Valley reckoning is on the horizon.  We have seen cyclical events like this before, the 2001 bubble burst being the most recent memorable reckoning. The talk in 2001 was about too much “dumb money.” The coming reckoning, however, is on a massive, unprecedented scale, fueled by the same excess of global capital that has fueled the bubbles in housing markets in attractive locations around the World. The problems with Uber, Travis Kalanick, and the now obvious difficulty of the Uber Board of Directors to exercise meaningful governance should have been the “canary in the coal mine.” CNBC’s reporting on the excessive Silicon Valley “unicorn” valuations and media reports that New Enterprise Associates would divest $1 Billion in startup investments that cannot be made liquid has now made the situation blatantly obvious. After a long silence, the Wall Street Journal has finally joined the reporting on the crisis. What more does one need to take to the exit? 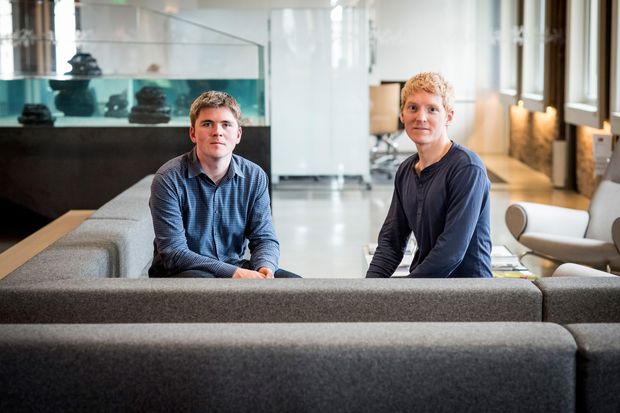 Two brothers who are co-founders of online payments startup Stripe, John Collison, left, president, and Patrick Collison, chief executive, have supervoting shares in the company, which was valued at $9 billion in its latest round of fundraising. PHOTO: DAVID PAUL MORRIS/BLOOMBERG NEWS
The Wall Street Journal
By Rolfe Winkler and Maureen Farrell

Founders of highflying startups are increasingly wresting control of their companies from venture-capital backers and extracting huge pay packages tied to going public.
Venture capitalists had long called the shots in startup boardrooms and continue to be the primary backers of private companies. But in recent years they have had to compete against new classes of investors including mutual funds, sovereign-wealth funds and now Japan’s SoftBank Group Corp. , which has a $92 billion Vision Fund investing in startups.
That has reduced their leverage, shifting power toward star entrepreneurs and adding pressure on VCs to cultivate “founder friendly” reputations that will help them get a piece of the next hot startup. The flood of capital also gives entrepreneurs the ability to pick not just their investors but also when and whether to go public. An initial public offering is the primary way in which VCs cash in on their gains from startup investments.

VCs say empowering founders—through special voting shares, governance rights and other tools—frees them to follow ambitious long-term strategies once their companies go public without having to worry that poor performance will bring pressure from activist investors that scoop up stock. They point to founder-controlled tech companies such as FacebookInc., where founder Mark Zuckerberg had power to make bold moves and resist early pressure to sell the company. Facebook, which went public at around $100 billion, is now valued at roughly five times that.
Venture-capital backers of Stripe Inc., whose software is used by businesses to accept and track digital payments, recently gave the company founders an incentive to go public: special supervoting shares. The move was meant partly to assuage the founders, brothers Patrick and John Collison, that they would keep significant control of the company they founded in 2010 if it went public, people familiar with the matter said.
Many of Stripe’s investors say the founders have earned the right to control the company because it has performed so well. It was valued at $9 billion in its last fundraising round. Until March, when Stripe added its first independent director, the Collison brothers’ only fellow director was Michael Moritz, a partner at Sequoia Capital, one of the company’s earliest investors. Stripe and Sequoia representatives declined to comment.
Glenn Kelman, the longtime chief executive of online real-estate brokerage Redfin Corp.that went public last July, said that in the run-up to the IPO he was pushed to be more disciplined with expenses by two big investors who traditionally buy public-company stocks but also back later-stage private companies. Redfin’s shares are up about 50% since the IPO.
“There is a new world of VCs who really can’t perform their governance functions on boards because they want to preserve their relationship with you,” Mr. Kelman said of the venture-capital industry.
Star founders of private companies often get to pick their own investors, but as public-company CEOs they can’t. Supervoting shares—typically a second class of stock held by insiders that have 10 votes per share—give founders more power to elect directors and approve other items up for shareholder vote and protect them from investors who may have different priorities.
Last year, 67% of U.S. venture-backed tech companies that staged IPOs had supervoting shares for insiders, according to Dealogic, up from 13% in 2010. The proportion of non-tech U.S. venture-backed IPOs with supervoting shares has stayed between 10% to 15% every year over that period.
The proportion rises as tech companies get larger: 72% of founders of U.S. tech startups valued over $1 billion that had IPOs over the past 24 months have supervoting shares, according to a Wall Street Journal analysis.

Empowering a founder has risks. Uber Technologies Inc. co-founder and former CEO Travis Kalanick built a ride-hailing juggernaut valued at $68 billion with a pugnacious leadership style, but that approach ultimately contributed to a series of scandals. His supervoting shares and de facto control of the board made it more difficult for investors to push him out.
They did so last year, and then abolished supervoting rights and adopted a “one share, one vote” policy ahead of a planned 2019 IPO, something Mr. Kalanick ultimately voted in favor of.
Spotify Technology SA’s shareholders issued special “beneficiary certificates” to its founders in February, in part because co-founder and Chief Executive Daniel Ek wanted to maintain control, a person familiar with the arrangement said. The certificates boosted Mr. Ek’s and his co-founder’s voting control to a combined 80.5%, double their economic ownership. Spotify listed its shares in April. A Spotify spokesman declined to comment.
Snap Inc., whose two co-founders control about 90% of its voting power, sold shares with no voting rights in its 2017 IPO, meaning public-market investors don’t have any say on corporate matters.
Evan Spiegel, co-founder and CEO of the Snapchat parent, received a $625 million stock package that vested with the IPO as an incentive to get it done, people familiar with the deal said.
Drew Houston, co-founder and CEO of online-storage company Dropbox Inc., in December got his own stock package worth potentially $590 million partly tied to his company’s March IPO, according to offering documents. The stock vests based on Dropbox’s share price, among other milestones, and he can earn the full amount only if shares reach $90, triple their current value. Mr. Houston already holds nearly $3 billion of Dropbox’s shares.
Bankers and lawyers who work on IPO deals say there is little precedent for big stock packages offered to founders ahead of public offerings, a reflection of venture-capital firms’ decreasing leverage. Snap and Dropbox representatives declined to comment.
Some star founders may even be emboldened to overstep boardroom norms.
WeWork Cos. co-founder and Chief Executive Adam Neumann, who has 65% voting control, is one of two members of his board’s compensation committee, along with longtime company investor Benchmark, according to WeWork’s recent bond-offering documents. Public companies aren’t usually allowed to have their executives on compensation committees—which set executive pay—to avoid conflicts.
A WeWork spokesman said Mr. Neumann takes $1 a year in salary and declined to comment on whether he receives stock compensation or recuses himself from committee discussions of his pay. It is unclear when WeWork will tap the public markets, but the company’s $4.4 billion investment from SoftBank in 2017 was seen as pushing out its need for a public offering potentially for years.
WeWork bond documents show that in 2016 and 2017, the company paid more than 1.3 million shares of class B stock compensation, worth more than $50 million at the company’s current valuation. Mr. Neumann controls 78% of class B shares, which come with supervoting rights.

—Eliot Brown contributed to this article.

Write to Rolfe Winkler at rolfe.winkler@wsj.com and Maureen Farrell at maureen.farrell@wsj.com